So I'm in Lisbon, Portugal. And the experience till now has been amazing, atleast as far as the city is concerned.
For starters old Lisbon is the most utterly romantic city I've ever seen yet. the narrow cobbled paths, the roadside cafes where you can just stare into the mist covering the city, and the colorful buildings lining the narrow streets, makes you want to hungrily absorb in as much as your eyes can take.
Considering that I have office on weekdays, I've taken to touring on the weekends.
What I've seen till now:

Old Lisbon from the top of a tram -
This was the first weekend, where we got out of the hotel, a little nervous and confused, coz conversing in this city is the most difficult part of any sight seeing. Everything is invariably in portuguese, and so once we got onto the bus, we didn't have a clue as to where to get down. the streets are spotted with figurines and gates bang in the middle of the streets, and somehow, they still look so in place.
Lisbon's architecture is a striking clash of the old world and new, the small one-vehicle-at-a-time streets pour out into huge roads, spotted with modern hotels and designer shops alongside cute little pastelarias(pastry shops).
This tour was an architectural revelation and an awesome one at that!!!

Sintra -
This is a little outside Lisbon. Next week, I ventured out, alone to Sintra, a 45 minutes train journey from Lisbon (Train station - Rossio). Armed with 'Lonely Planet ' which J gave me(God bless him) before I came here, and due to my expertise in dumb charades(!) I reached, quite safely, to Estefania.
You can climb up to the castles, or just take the tourist buses that take you around upwards to the castles and ruins that dot Sintra. As soon as the bus starts on the winding road up, you get the feeling of entering Cinderella land. The landscape is a mixture of the wild and the cultured, the pretty and the kitsch.
It's dotted by sprawling parks amidst wilderness. Unfortunately for me, due to some misguided advice, I reached pretty late. So I could visit just one site, that is the Palacio Nacional da Pena.
This is a sprawling and I guess the biggest park of Sintra, the peak of which holds the weirdly beautiful Palace, in pale yellow, pink and lavender turrets. 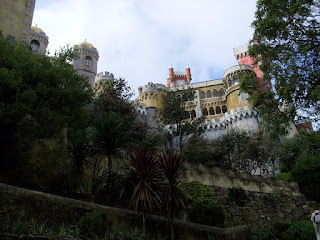 The most striking thing of the palace is the combination of architectures which you get to see here. Every room is full of art pieces, apparently , because of the fear of open spaces, during the 16th centuries. The rooms are hoarded with art like Messian porcelain furniture, a wall of unfinishe nudes(Dom Carlos I), Ferdinand designed China, Papier mache furniture and glass top holders, Indian and Arabic art, and so on.
In short, this palace looks like the perfect place of pleasure and sin, which is surprising, because the Palace is a reconverted Convent. This is the kind of place which takes you back into an era of high passions, kings and queens, and princesses in ball gowns.
After 3 hours, I had to drag myself out, so that I reached back on time. I hope to go again to Sintra to see the rest of the sites, and this time Im going early and trekking to the top !!